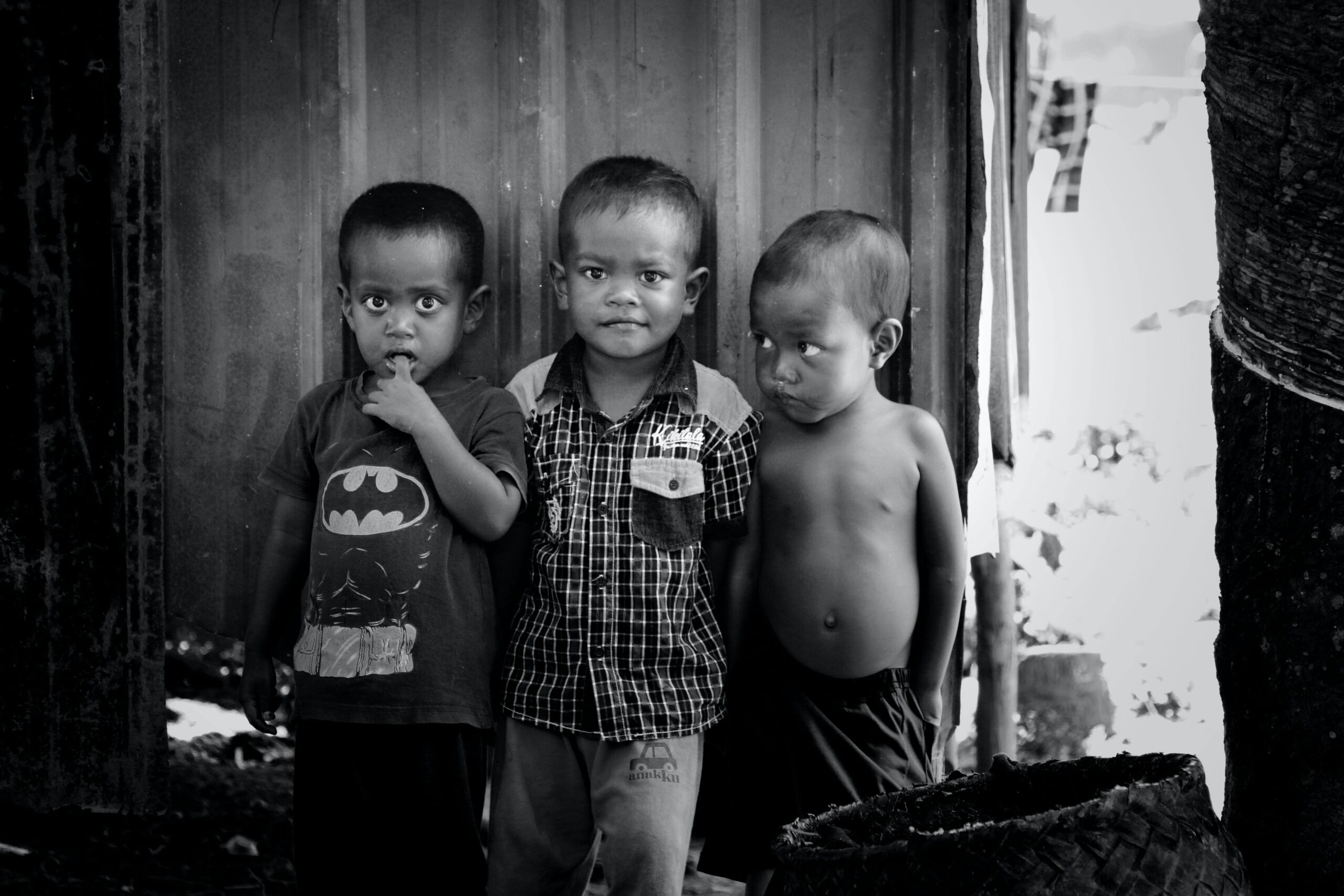 For the third year in a row, Treasury is ‘saving’ money by reducing income support to poor children, now claiming that this is necessary to cross-fund the SRD grant. The implied causality — that existing grants must be cut to fund the continuation of the SRD — is unjustifiable, especially when there has been a tax overrun. It is an unthinkable trade-off, literally taking food from the mouths of children.

President-elect Lula’s recent victory in the Brazilian elections is a reminder of what it feels like to have a glimmer of hope and faith. Hope for “a better life for all” and faith that the government, which is primarily there to serve the people of a country, will put the people first.

Among his commitments, Lula promised a return to the social policies of his previous two terms, in which millions were lifted out of poverty.

Key among these were cash transfers (social grants), which are shown to be extremely effective in reaching the poor and making a real difference to their lives and prospects.

South Africa far outstrips Brazil in terms of poverty rates and is now the most unequal country in the world.

Back home, Finance Minister Enoch Godongwana delivered his Medium-Term Budget Policy Statement in Parliament last week. He received a standing ovation from those present, and considerable praise in the media afterwards.

The adulation was presumably for his macro performance: reducing borrowing, stabilising debt and underwriting a large share of Eskom’s debt. The South African economy as a whole had, apparently, retreated from a “fiscal cliff”.

But this retreat came at a cost to social spending, notably for education, health services and social grants.

In effect, Treasury has made a policy decision that pushes the poorest and the youngest, who are already teetering on the brink, over the edge.

The Covid-19 social relief of distress grant (SRD) will be extended for an additional year to March 2024. This is to provide the government more time to dither about whether it can afford to provide a token amount of income support to the millions of adults who are unemployed and have no income — because there are no jobs.

The Covid-19 SRD is set at a static amount of R350 per month, meaning that the real value of the grant decreases every year. It would have been nearly R400 now if it had kept pace with headline inflation, and higher if aligned with food inflation.

From April 2024, there is no provision for it in the budget.

The older persons and disability grants received a R10 increase in October.

But there is no increase for the child support and foster child grants, or for the SRD. It is hard to imagine a rationale for these decisions, given the disparity in grant values and the ways in which they are targeted. 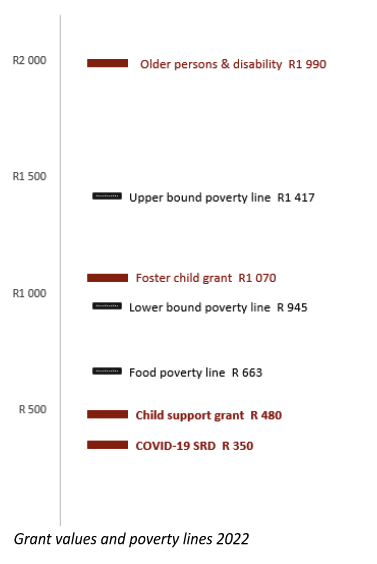 The older persons and disability grants, at R1,990 per month, are substantially above the upper bound poverty line. The grants are not generous but, according to Stats SA (which calculates the poverty lines based on a basket of basic food and other necessities), they provide enough for a person to survive.

But they only do so if they do not also have to support children and unemployed adults in the family.

However, the child support grant (CSG) and Covid-19 SRD are substantially BELOW the food poverty line, meaning that it is impossible for a person to survive on the grant because it does not even cover one person’s basic food costs.

Yet, unlike the other grants, the child support grant and SRD are targeted at the very poor via a means test. The CSG is the most pro-poor of all the permanent grants, as well as being well targeted at the poorest women and children.

Yet for the past two years it has received below food inflation increases, and an even lower increase of just 2% is planned for 2023.

Hunger and poverty among children

More than one in every three children in South Africa lives in food poverty, which helps to explain why our country has among the highest rates of child stunting in the world: 27% of young children are too short for their age because they are chronically malnourished.

When children are undernourished, they cannot develop healthily — they cannot learn effectively, they are more vulnerable to disease, and some do not survive.

Of every 1,000 children born, 28 die before their fifth birthday. Half of all child deaths in hospitals are associated with malnutrition.

In the meantime, the medium-term budget says that “given the cost of extending [the SRD], increases to other social grants in 2023/24 will be slightly below inflation and other social welfare priorities may remain unaddressed”.

For the third year in a row, Treasury is “saving” money by reducing income support to poor children, now claiming that this is necessary to cross-fund the SRD.

The implied causality — that other existing grants must be cut in real terms to fund the continuation of the SRD — is unjustifiable, especially when there has been a tax overrun.

Fewer SRDs have been paid in 2022 than were budgeted for, and this is entirely because of problems with implementation.

For example, the bank verification system (used to determine the income of applicants) could not distinguish sources of income, so that women who received grants for children in their care were unlawfully excluded from receiving the SRD for themselves.

Instead of allowing the unspent funds to augment the smallest grants or provide back-pay to those who had been excluded in error, the social assistance budget appropriation for the remainder of 2022/23 has been adjusted downwards.

The Treasury has reduced the overall budget for social grants by R6-billion: it is literally taking back money that was allocated to the poor, at a time when it is most needed.

Below-inflation increases will mean that the real value of grants is eroded: poor people will be poorer and there will be less food on the table.

This is a disaster for the 13 million children and the seven million caregivers (primarily women) who depend on grants to provide for them.

It is an unthinkable trade-off: the Budget literally takes food from the mouths of children.

The CSG was originally designed to cover the food costs of a child, but it soon fell below this level. After years of below-inflation increases, the child support grant (at R480 per month) has fallen to 72% of the official food poverty line (R663 per month). 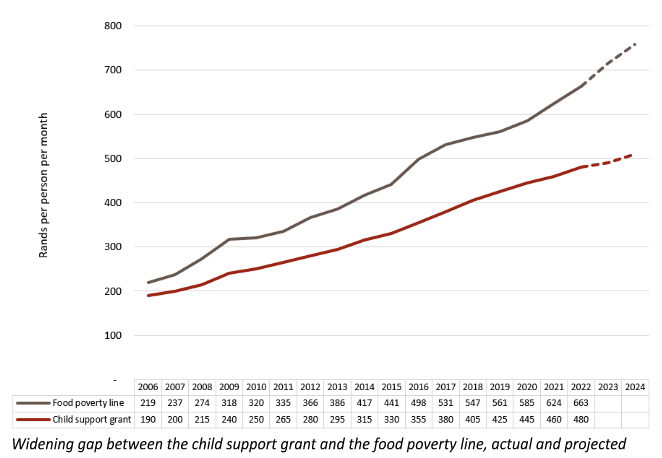 The planned 2023 increase of only R10 represents a 2% increase in the grant amount.

If this increase is implemented as planned, it will not be “slightly below” inflation. It will be substantially below inflation.

Food inflation was 12% in September 2022, compared with September last year. The CSG is buying less, and the gap between the grant and the cost of food will widen further.

The lockdown of 2020 led directly to rising unemployment and poverty, with women losing two-thirds of the total jobs lost. The number of children living below the food poverty line leapt from around 6.6 million (33%) in 2019 to more than eight million children (39%) in 2020.

The spike in poverty was offset for some months while the state provided disaster relief in the form of top-ups to most of the permanent grants, along with new temporary grants for caregivers and the unemployed. But these were short-lived, and after October 2020, the permanent grants reverted to their usual values and the caregiver grant fell away.

In 2021 food poverty rates among children remained the highest in more than a decade, since the 2009 recession.

Unless the Department of Social Development and Treasury budget for a substantial above-inflation increase in the child support grant (at least R40, bringing the value to R520 per month), millions of children will continue to go hungry, and the number will rise.

Austerity budgeting and balance sheet juggling has come at the cost of human development and survival.

Continuing to erode the CSG will harm the many women and children who already live a tenuous existence, against all odds.

It will continue to hamper the economy in the future.

It will be no comfort that the South African economy retreated from a cliff edge if the most vulnerable citizens were pushed over the edge.

The safety net is now too thin to catch them. DM/MC

By Katharine Hall and Paula Proudlock, senior researchers at the Children’s Institute, University of Cape Town. This article draws on a statement that was endorsed by the Children’s Institute at UCT; the Centre for Child Law at the University of Pretoria; the Children in Distress network; the Southern Africa Food Lab; the Healthy Living Alliance; and the Child Health Priorities Association. This article was first published on the Daily Maverick site on 31 October 2022.