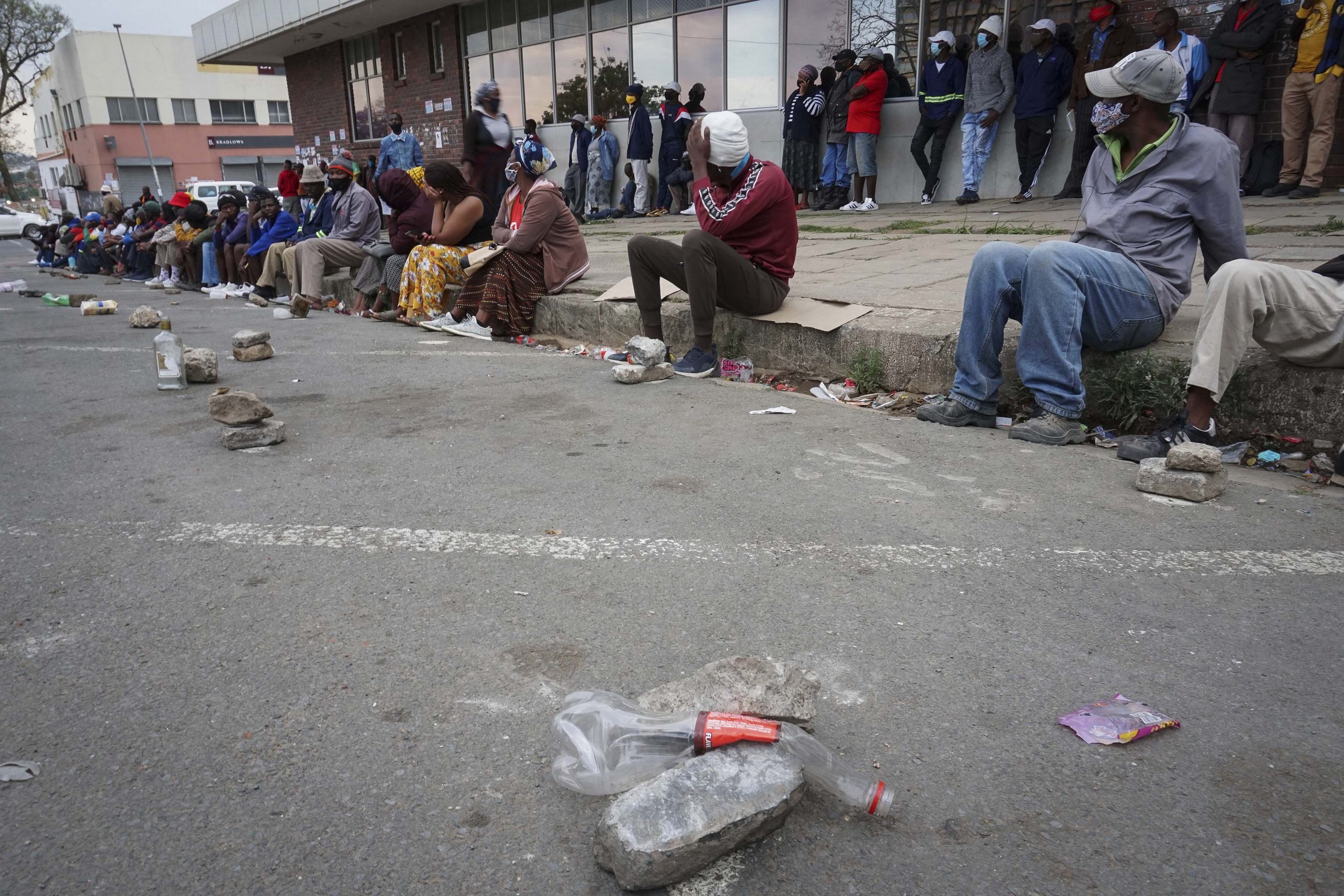 Posted at 07:55h in Uncategorized by Carolyn Cramer
0 Likes

Jobless people in the country’s most impoverished province join the growing social grant queues before dawn on empty stomachs, having run out of food for the month.

In Mthatha, scores of people wait near the post office in a long queue on Durham Street, which is closed to motorists but open to social grant beneficiaries and the public. Others sit on the pavement looking tired while those who arrived late and have no ticket lean against a wall.

The devastating effect of Covid-19 has caused suffering for many newly jobless people around the country. Those in the Eastern Cape, the most impoverished province in South Africa and the epicentre of the virus for some time during lockdown levels one and two, have been left with scars on their hearts and minds. According to the latest reports, the number of people infected in the province is again increasing daily. Many lives have already been lost.

On 15 October, President Cyril Ramaphosa announced that the R350 social relief of distress grant would be extended for three more months. To receive the funds, a person must get an SMS from the South African Social Security Agency (SASSA) inviting them to “collect the money” for which they applied.

Lukho Phantshwa, 23, from Kroza in Mvezo village, the birthplace of former president Nelson Mandela, is desperate to find any kind of job. When he received the grant for the first time in June, he did not sleep the night before.

“I’m starving and have no brother or sister to support me. In winter, I would go to bed at about 9pm or 10pm, because I knew that by 12am I should be up and get ready to leave my place [in Chris Hani township] 30 minutes later. I had no choice but to walk in the cold from home to town to get to that very long line. To make sure that I get money, I would arrive there at 1.30am, tired and hungry, waiting for the post office to open its doors at 8am. The grant makes a difference because I manage to send some cash to my mother and buy my nephew school shoes. Although I remain with nothing afterwards, I am happy that I am able to help them,” Phantshwa says while sitting on a brick that marks his place in the queue.

By 5.30am, a large number of people form a zig-zagging queue that runs from the Botha Sigcau government building to the post office on Sutherland Road. Those there since before dawn place stones, cardboard or plastic bottles on the street to reserve spots for friends, relatives or themselves. When someone leaves, those in the queue near them shift the objects until the person gets back.

Esihle Xelo, 25, from Upper Ngqwara in Mqanduli, shares a home with 14 family members. They depend on her grandmother’s pension to survive. She sits on the street with others in a similar situation. They all talk of being hungry and tired.

Xelo says: “I did not eat this morning. We have no food at home, so the grant helps to close the gap. For instance, two months ago, when I collected R700 [in September and August], I bought food for the family. But this time, I want to buy clothes for my three-month-old baby.”

Nozibaya Tanase, 48, who lives at eMarambeni in Mthatha, had to leave her children at Xhora village and borrow money from friends and neighbours to get back to Mthatha.

“I came here to collect my Covid-19 grant, though I’m a bit worried because I didn’t receive any SMS confirming that it is available,” she says.

Since the beginning of lockdown, many more people in South Africa have been going hungry, especially in rural areas and shack settlements. Mthatha is a congested town surrounded by villages. Many Eastern Cape breadwinners now struggle to support their relatives. Others complain that they go to paypoints every day but return home empty-handed. Some are turned away because of incomplete application forms or because their information was not processed by the time they arrived.

People sick with diseases not related to Covid-19 cannot take their chronic medication without food, and so many are dying from otherwise manageable conditions. Funerals are attended more frequently than weddings or cultural ceremonies. Though the majority of attendees wear masks, some do not practise social distancing.

Police officer Inspector Jongikhaya Alfred Khweba says people arrive in Mthatha’s central business district at about 2am or 3am. “In the past few months, they used to sleep outside the post office, but that was discouraged due to increasing pressure from authorities during the curfew,” he says. He frequently reminds beneficiaries to observe social distancing.

“In the past,” says Manyhanhya, “I worked in Rustenburg packing Coca-Cola drinks. But since I lost the job, I returned home in 2016 to assist people in Qunu who wanted someone to look after their livestock.” He uses the grant money to buy stock for street trading.

“I wake up at 3am … to prepare to walk to town to collect my Covid-19 money. To get there, I ask for lifts from … passing cars along [the] N2. If I’m lucky, I … arrive at about 4.15am. When I arrive, I stand in a queue until it stretches. From there, I leave and go to the taxi rank [or] wherever I find people gathering and selling brooms, rakes and mops and other things. A broom sells for R50 each, a rake would be R35 each and a mop for R40.”

Mwayi has seven children. He sells sweets for 30c each and loose cigarettes for R2 each. When business is good, he makes about R100 a day. He claims he has not benefited from the relief fund.

“I have not received any money since lockdown started. Every month when I come to town, the officials tell me that my name doesn’t appear on the computer,” he says. Before he lost his job in March, he worked at a butchery cutting meat.

Dayeni stays with her mother and two children. She says that when she can, she buys stock for her small business. “I sell toilet paper, which I roll seven times. From it, I make a profit of R16 per day if I charge R2 a hand-rolled piece. Then tea-showers sell for R50 for half a metre, but I can’t tell how much I make from sweets. It’s so difficult to count everything, but I know I don’t lose at the end of the day.”

Vuyani Xesha, 53, from Chris Hani township near Mthatha, says his employer had a contract to build houses near an industrial area. He used to be paid R900 a fortnight.

“I worked as a house builder for three years, but the job ended in March. When I was still working, my salary was too little. I did not even get payslips. I was paid cash on my hand. Since this corona, I am unable to support my wife and kids,” he says.

Everyone in the queue has a story to tell. Bongiwe Zembe, 45, a resident of Tshemese village, wanted her voice heard. She leaves for Mthatha at 4am, when it is still dark.

“I pay a taxi driver R26 for a round trip to town. Sometimes I wait there for two hours or more, depending on the numbers on that particular day. Today I’m number 148, and the line is too slow, but I won’t give up. When I get the money, I will buy 12kg maize meal, 10kg rice, 12kg samp and another 12kg cake flour, which will last us for a month,” says Zembe.

Most beneficiaries say they wait too long for their money. Sometimes, they claim, the officials tell them the cash is finished and they must try again another time.

This article was first published by New Frame.