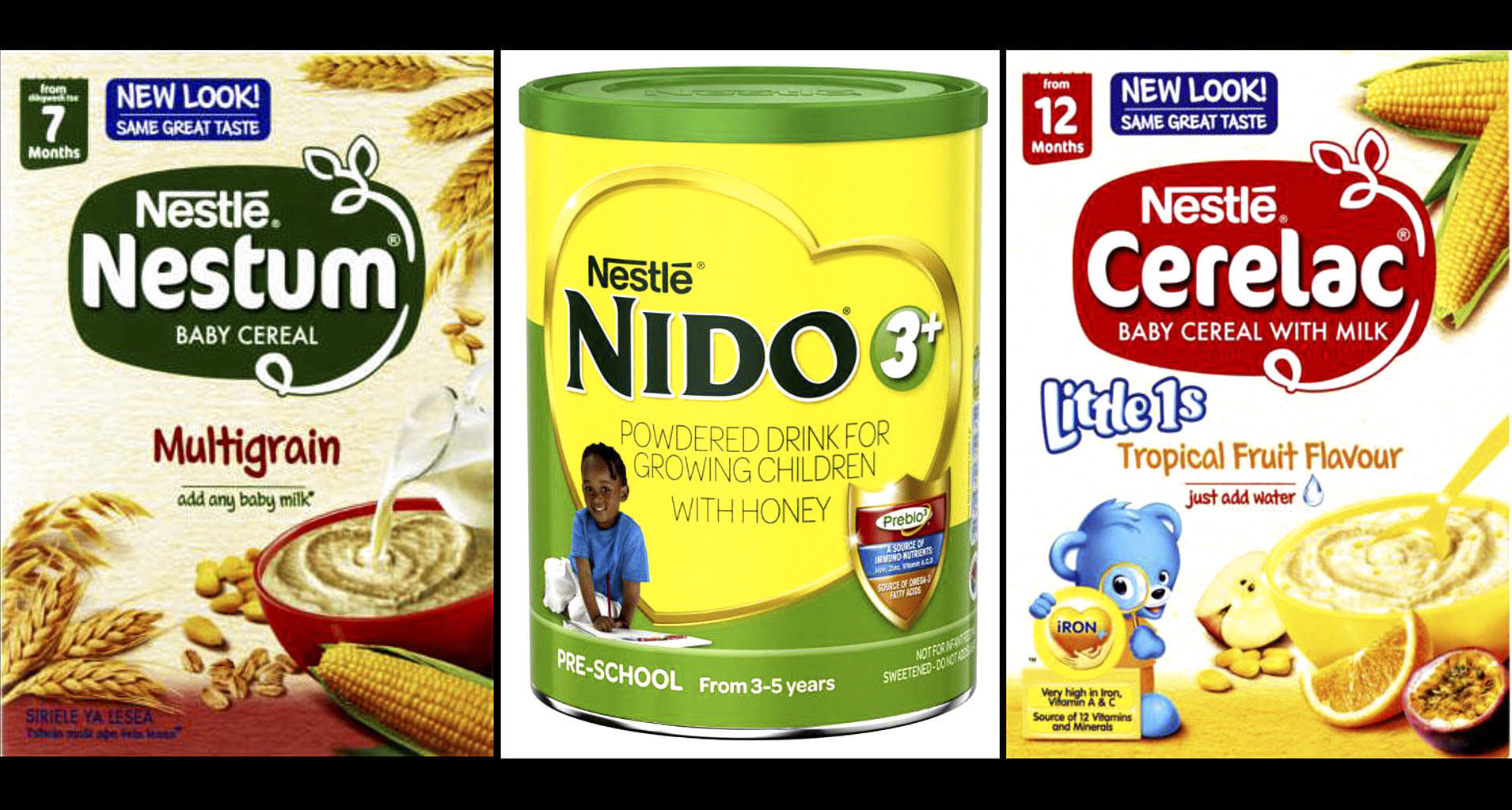 Posted at 11:17h in Uncategorized by Carolyn Cramer
0 Likes

A group of nutrition and child health experts together with health and children’s rights activists have condemned a marketing event planned for this Saturday, 14 August 2021 that has been sponsored by Nestlé. They argue that it is unlawful because it promotes food products that are dangerous for children’s health.

Note: At 8.50 am on Friday, August 13, this article was updated following confirmation that the event has been cancelled. See below.

Health activists complain that this is not a once-off, but part of a series of “mum and child” stokvel events targeting readers of You, Drum and TrueLove magazines.

The particular event is being publicised on a News24 platform in an advert that prominently features Nestlé, as well as three of Nestlé’s infant feeding products (Cerelac, Nestum and Nido3+). It is being billed as an online “Free Stokvel Mom and Child Forum” where health professionals and Nestlé brand ambassadors will share information about infant feeding.

It claims it will benefit “all moms, grandmas, aunties and guardians of little ones”.

According to Catherine Pereira-Kotze, a dietician and PhD candidate in public health at the University of the Western Cape, child health experts are up in arms because “the nutritional status of children in South Africa has been a cause for concern for many years and is set to worsen due to the impacts of the Covid-19 pandemic.”

They point out that in 2016 chronic malnutrition, manifesting as stunting, affected more than a quarter (27%) of children under the age of five in South Africa and in 2018, 11% of children (2.1 million) lived in households that reported child hunger and that survive below the income poverty line.

According to Lori Lake of the Children’s Institute at UCT “even pre-Covid-19, 59% of children (close to 2 in 3) lived below the poverty line, 30% were without water on site, and 21% without adequate sanitation. Since the Covid-19 pandemic, child hunger has increased with 1 in 7 households reporting a child went hungry in April 2021 — and anecdotal reports suggest a rise in cases of severe acute malnutrition.

Lake and others argue that “In the context of widespread and rising food insecurity, there is a real risk that caregivers will water down these expensive and ultra-processed foods to make them stretch further in ways that threaten children’s health, survival and development. So it is important that South Africa upholds the regulations currently in place to protect and promote Infant and Young Child Feeding practices that are healthy, affordable and sustainable.”

But, say activists, another concern is the fact that even whilst undernutrition is a growing problem, rates of overweight and obesity in children are also increasing with 13% of children under five being overweight for their height. A recent report by the World Obesity Federation anticipates that SA is likely to have the 10th highest level of childhood (ages five to 19) obesity in the world by 2030.

Public health experts say that these rising rates of obesity are directly connected to increased ultra-processed food consumption. Yet all three products being advertised by Nestlé are ultra-processed, contain added sugars and are unaffordable for most households. They claim there is also evidence that these products often interfere with optimal infant and young child feeding practices, breastfeeding in particular.

It is for these reasons and to bolster infant nutrition, that the World Health Organization (WHO) and Unicef, together with the National Department of Health (NDoH) recommend exclusive breastfeeding for the first six months of life and continued breastfeeding up until two years and beyond together with the addition of safe, affordable and nutritious complementary foods from six months.

But for many women living in poverty this is a challenge, as explained by Chantell Witten, a registered dietitian and Nutrition Lead for the South African Civil Society for Women’s, Adolescents’ and Children’s Health (SACSoWACH) (see a recent article in Maverick Citizen here). In South Africa, for example, exclusive breastfeeding under the age of six months remains low at 32%, well below the WHO target of 50%. South Africa also has high rates of the early introduction of complementary foods.

ctivists also take issue with the marketing strategies that have been used in the advert for the “Stokvel Mom and Child Forum”.

They argue that use of the word ‘stokvel’ is problematic as a ‘stokvel’ refers to a community-based savings scheme that has traditionally been used in South Africa for essential items. Research shows that in South Africa, “stokvels form part of many vulnerable people’s social protection net, allowing households to build resilience, particularly at a time when Covid has intensified poverty and hunger.” A stokvel would not traditionally be used to purchase or access the types of products being advertised by these events.

However, says Rina Swart, Professor in the Department of Dietetics and Nutrition, and DSI/NRF Centre of Excellence in Food Security at University of the Western Cape, Nestlé is using this as an opportunity to promote their products, products that may be harmful to health due to their ultra-processed ingredients.

In addition in a manner often seen in the marketing strategies used by the fast-food industry worldwide they also deploy emotive words in the advert to persuade mothers that their products are necessary. “Get ready to be empowered”; “you’ll learn valuable information”; “It’s all about learning together and building a community of like-minded caregivers who want to grow with their little ones”, they promise.

Activists also complain that the inclusion of a health professional (a nurse with a PhD) on the panel is another marketing strategy “intended to convince mothers or caregivers that these products are endorsed by health professionals.”

This morning, the Healthy Living Alliance (Heala), a civil society coalition working to advance food justice in South Africa, also issued a statement demanding that the event be cancelled immediately and for the National Department of Health to sanction Nestlé.

According to Angelika Peczak, Nutrition Programme Manager, at Heala:

“This event provides a perfect example of how the industry plays on the vulnerabilities of mothers to market their products and generate profits at the expense of South Africa’s children’s health. Nestlé is openly flouting the law. Further, by timing it after World Breastfeeding Week, Nestlé is making a mockery of the real and serious nutrition issues South African children face. Hunger and malnutrition are a public health crisis.”

According to Safura Abdool Karim, a senior researcher at SAMRC/Wits Centre for Health Economics and Decision Science (know as Priceless SA) “Nestlé are violating South Africa’s Regulations relating to foodstuffs for infants and young children (known as R991).”

Abdool Karim told Maverick Citizen that government had implemented R991 in 2012 in recognition of the importance of exclusive breastfeeding and to counteract “predatory practices” by formula producers to undermine exclusive breastfeeding among women with HIV in particular. R991 therefore “applies to manufacturers and distributors” and aims to limit the promotion and marketing of an array of commercial products including infant formula, complementary foods and powdered milks for infants and young children under the age of three years old.

However, Abdool Karim says in this case Nestlé are incentivising potential consumers to “make contact” through a free event. They are also offering cash-strapped mums the opportunity to win R500 Shoprite vouchers and for those who attend to receive information about the use of their products in childhood and infant feeding.

In addition section 7(5) of R991 states: “No manufacturer, distributor, retailer, importer or person on behalf of the aforementioned shall produce, distribute and present education information relating to infant and young child nutrition”.

However, the webinar invitation indicates that Nestlé, a “manufacturer” of infant formula, will be involved in providing infant and young child feeding advice. It states:

“Feeding your littles one can be challenging, but it doesn’t need to be. We’ve got you covered! Join the FREE Stokvel Mom and Child Forum event on 14 August 2021 – brought to you by Nestlé   CERELAC, Nestlé NESTUM and Nestlé NIDO +3 – to learn everything you need to know about feeding your little one.”

Overall, the event is billed as educational with three of the speakers described as Nestlé brand ambassadors “well-trained” in infant nutrition.

All this, says Abdool Karim, is clearly in violation of the R991 regulations.

In response to a request for comment on activists’ accusations Saint-Francis Tohlang, Corporate Communications & Public Affairs Director for the East & Southern Africa Region (ESAR) of Nestlé, today reaffirmed the company’s belief “that breastfeeding is best for babies” adding that “all our infant formula products bear the following important notice: “Breastmilk is best for babies.  Before you decide to use an infant formula consult your health professional for advice.”

Tohlang denied that the company was violating the regulation saying that the Regulations “do not prohibit communication on complementary foods to the general public.”

“Nestlé NIDO 3+ is not a breastmilk substitute and it is formulated for children aged 3 to 5 years old. This product, therefore, falls out of scope of R991, thus nutrition and feeding education can be done for this specific age range.”

Tohlang concluded that because they considered the event to be compliant with R991 “we are proceeding” but that they had “reached out to the National  Department of Health to engage on this concern raised.”

By contrast, Popo Maja, head of Communications and Stakeholder Management at the National Department of Health, stated categorically:

“The planned event indeed violates Sub-Regulation 7(3)” and added that “we are currently engaging with Nestlé regarding this. I can assure you that we will do everything from our side to ensure that this event does not take place. If Nestlé fails to comply, legal processes shall follow.” DM/MC

On Thursday evening, Maverick Citizen received the following statement from Saint-Francis Tohlang at Nestle:  “Having considered the allegations and following our correspondence with the National Department of Health, we have decided to cancel the event. It is important to emphasise that we still maintain that the event is fully compliant with the R991 regulations.

Activists have welcomed Nestle’s decision and vowed to continue to work with the government and food industry to ensure that the R991 regulations on infant feeding are respected and enforced.

Department of Health spokesperson Popo Maja noted “with gratitude” Nestle’s decision to cancel the event.  “We strongly maintain that it violates the R991 regulations. Volumes of evidence does show that Exclusive breastfeeding is important for the child healthy development,” it said in a statement.