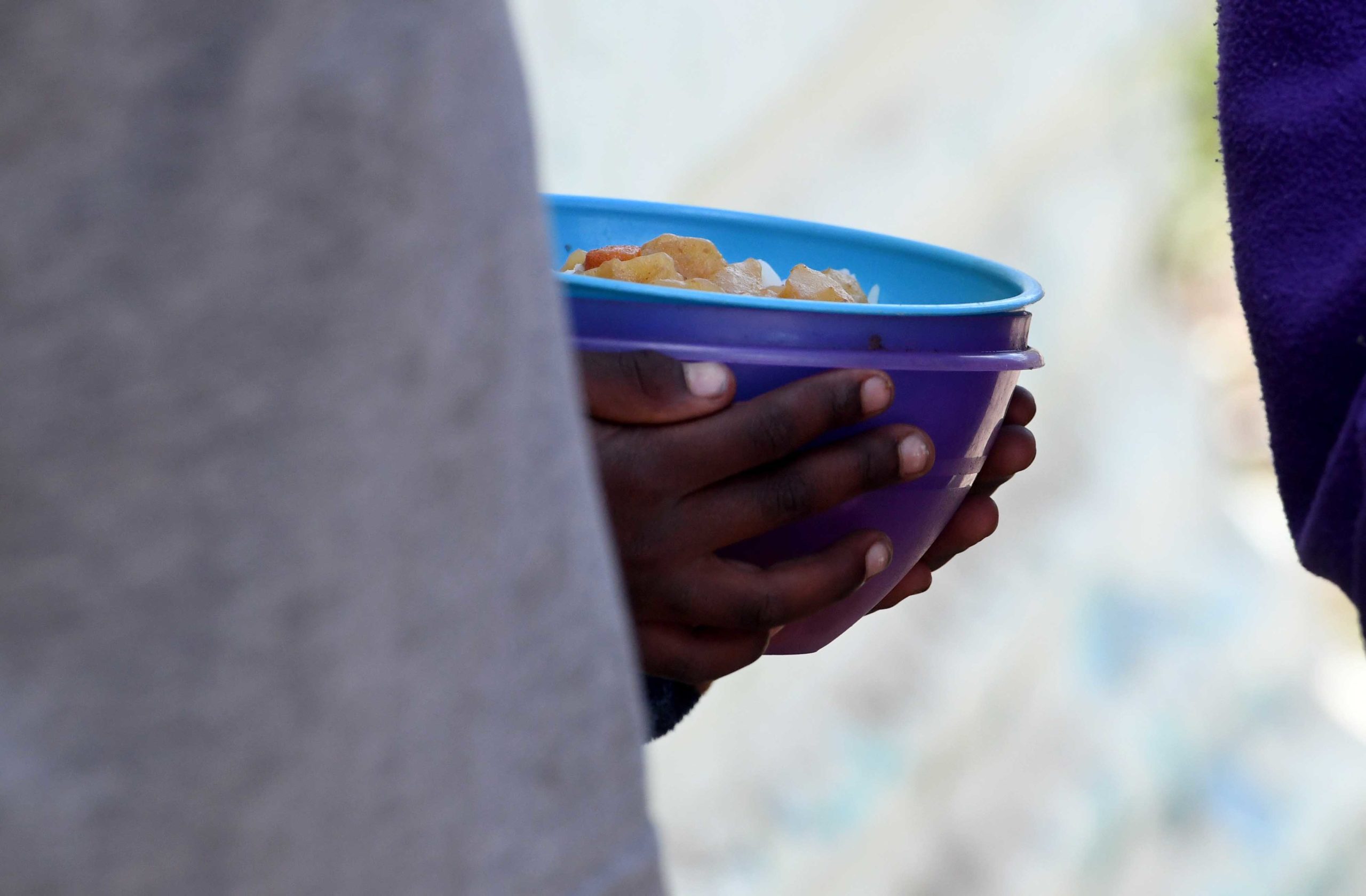 04 Oct In-depth: What’s behind the increase in malnutrition deaths among Free State infants?

On the day Luleka Gqumeta’s baby died, she says she was in the streets begging for food for her and her children. It was October 2020, amid COVID-19-related social restrictions and Gqumeta – unemployed with three other school-going children – was struggling to feed her family. Her baby – Alwandle – was six months old.

“He was not sick,” she says, “and I did not expect anything bad to happen to him.” She had asked a neighbour to look after Alwandle while she went out to look for food.

“When I came back, he was very weak. I held him in my arms, but I could sense that something was wrong with him. I asked my neighbour what was wrong with the child. She told me that he had been sleeping the whole day. He died in my arms. When the ambulance arrived, they told me that the baby died because he was underweight. I am still heartbroken and hurt by the death of my child. I wish I could do more for my children so that they can live a healthy life. We are still poor and I am still trying,” she says.

She says Alwandle was underweight when he was born.

“His birth weight was 1.8kg and when he passed away, his weight was at 6kg.” The World Health Organization defines low birth weight as babies born with a weight lower than 2.5 kg and flags it as a “significant public health problem globally [that] is associated with a range of both short- and long-term consequences”.

“I was exclusively breastfeeding for the first six months after birth,” says Gqumeta, “and for the baby to gain more weight I was given supplements and was advised to have peanut butter with every meal that I eat, but that did not help.”

She says she attended Kagisanong Clinic and did not skip any of the baby’s clinic dates.

“The nurses used to tell me that they are worried about the child’s weight, but unfortunately, he passed away. I am an adult and I know that my child died of hunger. Sometimes we go to bed on an empty stomach or go days without eating food and because of that I could not produce enough breast milk for the baby.”

She says she depends on donations and a government grant. The three other children – aged 18, 12, and eight – are fortunate, she says, because they receive meals at school, however, feeding them becomes a problem during school holidays and weekends because they are at home.

Gqumeta is one of over 700 000 beneficiaries of the child support grant in the Free State. The grant is her only stable source of income, she says.

When Free State Health MEC Montseng Tsiu took to the podium in April this year to deliver her budget speech, she said there was an increase in deaths of children under five mostly due to severe acute malnutrition which has increased from 3.1% in the 2020/21 financial year to 9.6% in 2021/22.

Putting these percentages into perspective, Free State Health spokesperson Mondli Mvambi tells Spotlight this means of all the children admitted to the province’s hospitals for acute malnutrition, 48 died in 2020/21 and 86 in 2021/22.

“The importance of food security and nutritional welfare for all South Africans has been emphasised by the COVID-19 pandemic, which has also highlighted the vulnerabilities in our food systems,” says Professor Corinna Walsh, a Professor of Nutrition and Dietetics in the Faculty of Health Sciences at the University of Free State. “An individual’s defence against disease must include eating a healthy diet.”

The various forms of malnutrition can occur in the same household and even in the same child, she says.

Effects will be long-term

According to Walsh, it is important to prioritise the challenges faced by specific populations, which include the elderly, women – especially women of childbearing age – children, and those with pre-existing medical conditions most notably HIV/AIDS, TB, and non-communicable diseases.

When asked how one knows that a child has died of severe acute malnutrition, Walsh says, malnutrition does not only affect the growth of children but also has a major impact on their immunity – significantly increasing their risk of infection and disease. “The different forms of malnutrition have specific diagnostic criteria that can assist in identifying malnutrition but because malnutrition often occurs in combination with medical conditions, the cause of death is often not stated as malnutrition.

Walsh says that increased child malnutrition, particularly wasting, is considered to be the result of sharp drops in household incomes, changes in the availability and price of nutrient-dense foods, and disruptions to social protection services. Other types of malnutrition, including child stunting, micronutrient malnutrition, and maternal nutrition, are anticipated to worsen as the economic and food systems problems worsen, she says.

“The severe effects of the COVID-19 pandemic on early nutrition could have long-term effects on schooling, the risk of developing chronic diseases and the development of all human capital if proper measures are not taken,” she says.

Why have numbers increased in the Free State?

One of the reasons for the increase in the Free State, Mvambi says, is that they saw a decline in people attending health facilities during the hard lockdown in 2020.

“This could be attributed to fear of parents contracting the virus in healthcare facilities, therefore, there was a poor health-seeking behaviour,” he says.

A presentation by the Office of the Premier to the health committee in the Free State legislature in August showed that the provincial health department missed its first quarter (April to July 2022) target for a case fatality rate for severe acute malnutrition in children under 5 of 1.8%. The department clocked 6.4%. Reasons for this were attributed to over-reporting, meaning that children older than 59 months were also included – suggesting the number is inflated. Other reasons cited were delayed healthcare-seeking behaviour and the late identification of acute malnutrition due to poor integration of services.

What can be done?

Some of the solutions offered by Walsh include prioritising nutrition on policy agendas related to health and social security and a regulatory framework to support access to healthy and affordable foods. Walsh says it will help if there is coordinated and aligned programming to address food and nutrition security in collaboration with other sectors, including civil society organisations. These coordinated strategies should be well-funded, she says, and must “actively address the main drivers of malnutrition, which include paying attention to food, nutrition, and health backed up by responsive social protection mechanisms”.

She says investing in human resources by, for example, increasing the number of qualified nutrition professionals as well as education opportunities for other cadres of workers that provide nutrition services in primary care settings, is also part of the solution. According to her, there is also a need for nutrition education through targeted nutrition messaging and communication campaigns.

According to Mvambi, the health department has already embarked on this type of community education aimed at preventing possible cases of severe acute malnutrition.

The health department in its annual report for 2020/21 undertook to address the underperformance on targets relating to maternal and child health. The department said it would “strengthen screening for pregnancies at all service points, ensure food nutritional supplementation coverage for children under five and intensify its case finding of children who need these nutrition supplements”. To address the rate of neonatal deaths in health facilities, the department said it would improve the competency of neonatal care personnel and improve the quality of antenatal care, among others. In this regard, Tsiu in her budget speechsaid there are plans in place that include a collaboration with the University of the Free State and the schools of nursing to improve the skills of healthcare providers in maternal and child health.

According to Tsiu, her department has also embarked on “an immunisation and Vitamin A supplementation drive to decrease morbidity and mortality of children due to vaccine-preventable diseases”. She said the department’s Three Feet model that was piloted in the Thabo Mofutsanyana District to decrease maternal and under-5 mortality will this financial year be expanded to four other districts. She described this model as an “accountability model” that requires that all maternal and under-five deaths must be reported within 24 hours, reviewed within 48 hours, and also requires recording the main cause of death and address the contributory and modifiable factors”. Through this quality improvement plans can be developed and implemented to prevent a recurrence.

Falling through the cracks

The department also wants to strengthen the intersectoral collaboration with the relevant government departments such as the Department of Social Development to prevent and manage all forms of malnutrition in children.

According to the spokesperson of the Free State Department of Social Development, Lindiwe Mnguni, they received 667 512 applications for COVID-19 social relief grants and approved 391 639 in the Free State.

The province also has 726 048 beneficiaries of the child support grant.

When asked what programmes are available to families that are affected by malnutrition apart from grants she says, “On the issue of grants not being enough to provide for nutritional meals, grants are given as a supplement to assist those in need with basic necessities and should not be viewed as the only intervention government has put in place to assist children in need. The department focuses on children in need of care and protection in general and provides services through drop-in centres. We also have community nutrition distribution centres that provide meals to families in need,” she said.

But some community leaders believe that the social programmes to assist those in need are inadequate.

Qomoyi says she has been feeding children for the past six years as she cannot stand seeing children go hungry.

“The child support grant is not sufficient to take care of children,” she says, “and as an NGO we are left to fill the cracks, often with no financial help.” Qomoyi says the department (DSD) should find ways to work more efficiently and government must do more to empower those in charge of children.  “Provide people with jobs, create a voucher system as opposed to giving people cash, and create partnerships with stores like Boxer to ensure the grant is mostly used for food. We must do more,” she says.

This article was first published on Spotlightnsp.co.za on 28 September 2022.