Posted at 15:10h in Uncategorized by Carolyn Cramer
0 Likes

When corporate staff from the South African finance sector arrived at Spier wine farm and were loaded into the back tray of Farmer Angus’ giant farm truck, they immediately knew they were in for something different. On 30 January 2018 the Food Lab facilitated a Learning Journey on South Africa’s Future Food System funded by the Green Trust and WWF-SA’s Smart Food Initiative with thought leaders in private sector finance, insurance and investment. This unique Food Innovation Learning Journey brought together representatives from private sector agricultural finance, investment and insurance for a day in the field, and was crafted to showcase and interrogate innovative projects and farmers in agricultural production, conservation, renewable energy and education. 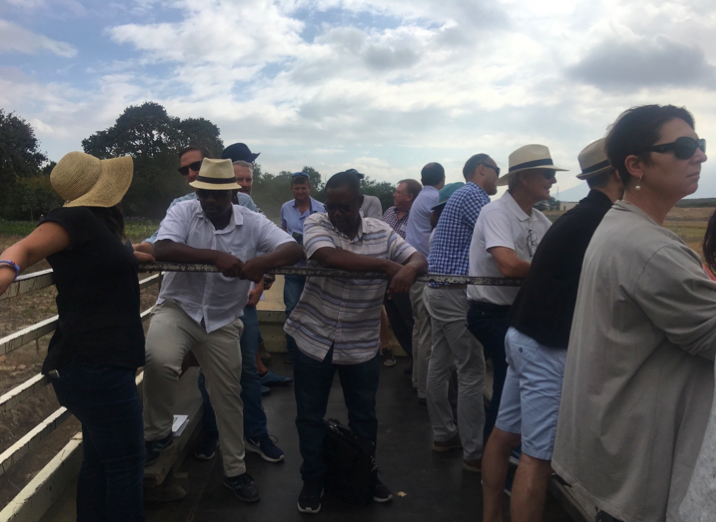 The learning journey aimed to fulfil on a range of objectives, including to:

After a short ride, the first stop of the day was Angus McIntosh’s chickens. On stepping off the truck on a grassy hill, invitees were greeted by the sound of the clucking chickens coming from the mobile chicken tractors. These tractors are moved regularly around grassy areas of the farm, providing chickens open feeding with plenty of space to roam before coming to roost safely inside the tractors at night. The method of free-range chicken farming was held in stark contrast to the images from the Food (R)evolution exhibition curated by Luke Metelerkamp which were strung between the tractors and showed factory farming and chicken meat houses.

After Tatjana von Bormaan from WWF South Africa opened the day, Dr Scott Drimie, Director of the Food Lab, used the surrounding landscape visible from the hill along with images from the Food (R)evolution exhibition to draw the attention of participants to certain issues that characterise the food system in South Africa. This included aspects such as the duality of the agriculture system, resource constraints in water, land and soil, rapid urbanisation, the nutrition transition, the long-term health implications of malnutrition, climate change, fisheries depletion, concentration of power, uncertainty in policy and increasing food loss and waste. 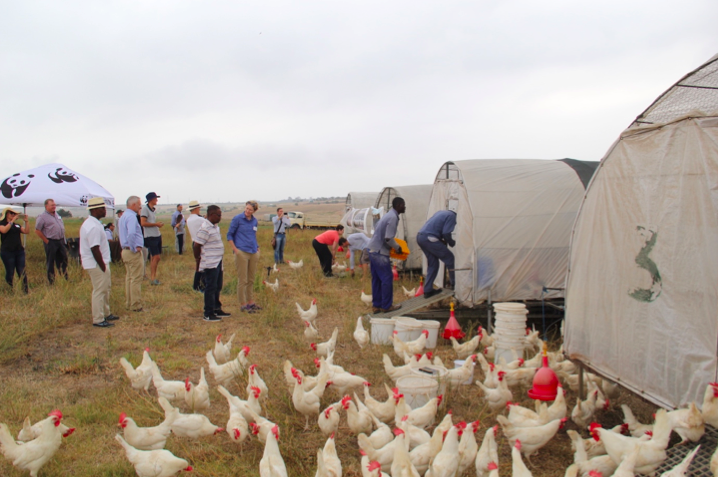 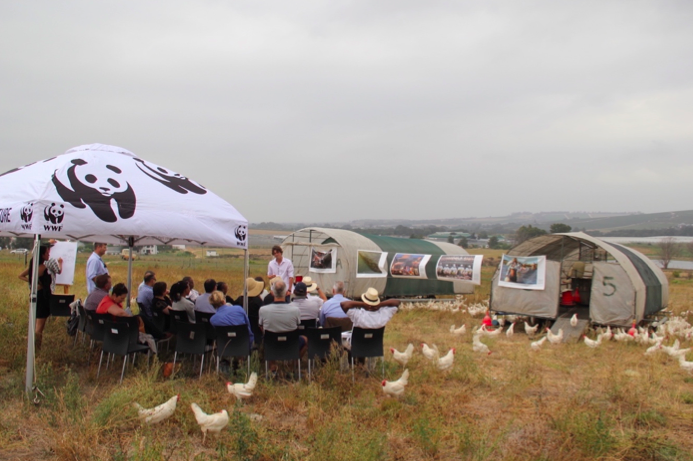 Moving from the local context characterised by Dr Drimie, to a global perspective, Justin Smith followed by presenting research conducted by WWF on the top 10 future trends expected to change the global food landscape.

Following a short bus trip, the next stop was in Phillipi at Agriprotein, a company founded in 2009 that converts food waste from restaurants and retailers in Cape Town to insect protein in the form of fly larvae as a natural feed source for poultry. Nostrils flared from the strong smell of protein as participants were led past breeding tanks and larvae incubation labs deeper into the warm factory. The Agriprotein team developed the notion of nutrient recycling and a vision to make an impact by closing loops in aquaculture and agriculture reducing environmental impact. With the capacity to divert 100 tonnes of waste organics from landfill per day and produce over 2000 tonnes per year insect-base, the site is no small feat, and the opening of Agriprotein’s doors in 2016 saw the world’s first industrial-scale insect recycling. 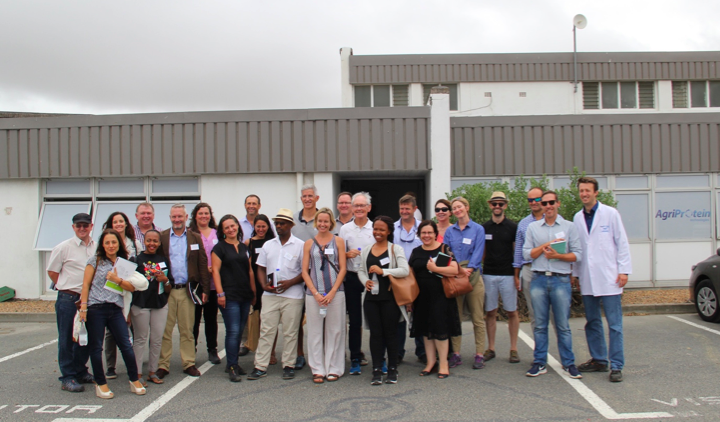 After the tour, the Food Lab was hard pressed to tear participants away from the Agriprotein laboratories. The group boarded buses and made its way across Stellenbosch to Villiera Wine Farm. Family-owned, Villiera has experimented with various environmentally friendly vineyard practices and conservation efforts, including a wildlife sanctuary and renewable energy to supply the farm’s entire energy requirement outside of harvest time. Also physically hosted on the farm are two very well-known social innovation projects: The Pebbles Project, which provides a low cost, early childhood development programme for more than 30 children of Villiera farm workers along with a mobile library and educational vans; and OWETHU clinic, an initiative of CIPLA Foundation offering low-cost primary healthcare to families employed by Villiera and surrounding farms. 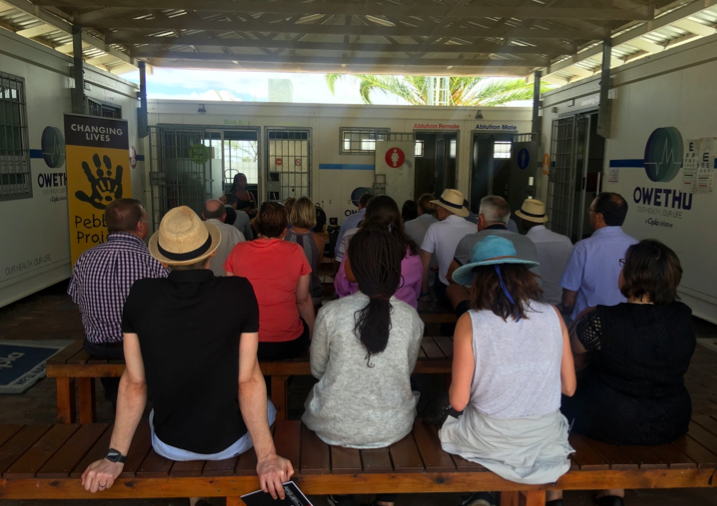 The final stop of the day took participants to Bartinney, another family-owned wine farm, where Rose Jordaan greeted participants and shared the story of the family’s ethos which is that truly great wine begins in the vineyard and a great vineyard is founded in a diverse and healthy environment.

Jacky Goliath from De Fynne Nursery joined the group over lunch. Jacky was awarded the Farmer of the Year Award in 2015. Jacky shared her and Elton’s story from growing their nursery of 1000 plants in 2001 to over 600 000 plants in 2017 and supplying big name retail clients. In particular, she shared some of the challenges faced by small-scale farmers such as planning and preparing for changing weather conditions, coping with the drought, finding ways to decrease water use, and demand fluctuations. As part of their successful business model, she cited their focus on diversifying in horticulture and indigenous plants for landscaping for large clients such as agribusinesses, as well as expanding their retail linked to middle and lower income households. Jacky and Elton’s story also provided a “reality check” on the time it takes to achieve success. The Goliath’s had to work externally full time to support their living expenses until the business was able to “afford” their service, as they were constrained in their ability to get credit from banks. This limitation to emerging farmers sparked conversations within the group regarding the financial and insurance barriers for small-scale farmers in South Africa to grow at a pace that is competitive with big farms, and led to discussions about what innovations could be developed within the lending and insurance sector. 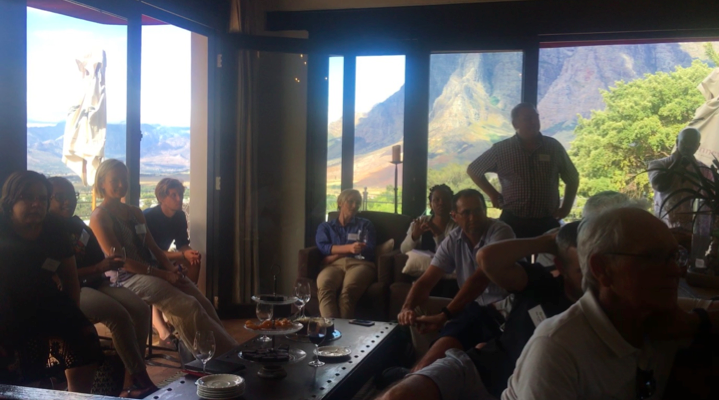 The final two hours of the day was dedicated to a process of unpacking what had unfolded, asking participants to reflect on such things as: What were their assumptions coming to the day about what they would experience? What were the implications of what they had seen on the learning journey and the resultant impactS on their own work? What had shifted for them?

Participants were invited to share innovations from within their work in the agricultural finance sector that highlighted enabling factors for success, and learnings on what has not worked. This led to conversations on how to achieve innovation at scale, including insights from innovations such as the Blended Finance Instrument for Agriculture Framework being developed between government and private finance sector led by the Banking Association of South Africa; Santam’s learnings from attempts to introduce a weather index insurance and the application of precision technology to mitigate risk; and Nedbank’s offering of renewable energy packaged with a free technical advisory service.

As a conclusion, artist Andy Mason, who had been following and listening to the group throughout the day, reflected to the participants what he had heard and seen using cartoons he had drawn on the experience. Andy’s humorous and insightful cartoons served as a useful reflective tool to the group, providing an outsider’s perspective on the main takeaways and a reminder of the very diverse innovations which had been showcased. 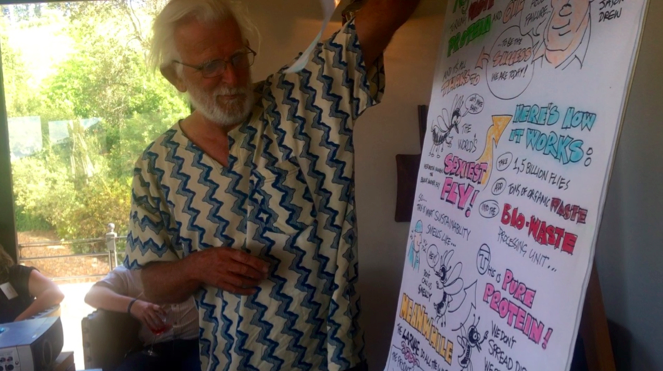 In wrapping up the day’s journey, Dr Drimie concluded by summarising some of the key discussions, dwelling on the point that investments made by the private sector in finance, investment and lending in technology innovations had the potential to either shift the food system onto a more sustainable and equitable path, or reinforce the current trajectory. Blending and balancing between social, technical and environmental aspects requires careful engagement best informed by dialogue such as this to consider long-term solutions.