12 Oct Eating for the nation – Juju shows the way 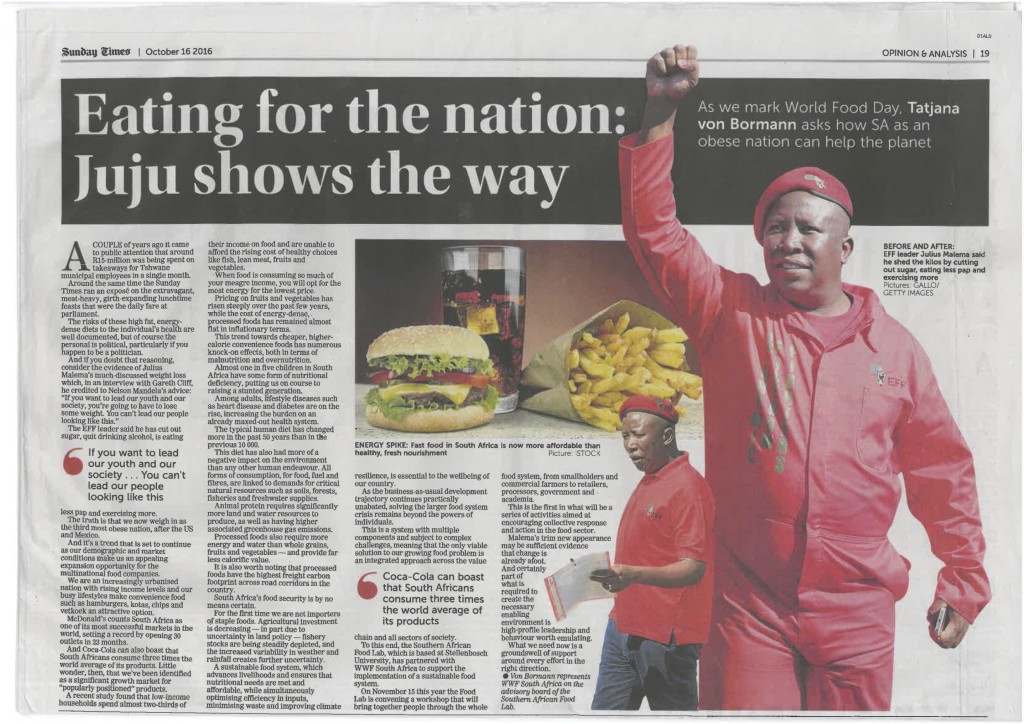 As we mark World Food Day on 16 October, Tatjana von Bormann appeals to South Africa’s political leaders to show the way forward by adapting their diet for their own sake and the sake of the planet.

A couple of years ago it came to public attention that around R15m was being spent on takeaways for Tshwane municipal employees in a single month. Around the same time the Sunday Times ran an exposé on the extravagant meat-heavy, girth-expanding lunchtime feasts which are the daily fare at parliament.

The risks of these high fat, energy-dense diets to the individual’s health are well documented, but of course the personal is political, particularly if you happen to be a politician.

And if you doubt that reasoning, consider the evidence of Julius Malema’s much-discussed weight loss which, in an interview with Gareth Cliff, he credited to Nelson Mandela’s advice: “If you want to lead our youth and our society, you’re going to have to lose some weight. You can’t lead our people looking like this.” The EFF leader said he has cut out sugar, stopped drinking alcohol, is eating less pap and exercising more.

The truth is that as a nation we now weigh in as the third most obese nation in the world after US and Mexico. And it’s a trend that is set to continue as our demographic and market conditions make us an appealing expansion opportunity for the large multinational food companies. We are an increasingly urbanised nation with rising income levels and our busy lifestyles make convenience food like hamburgers, kotas, chips and vetkoek an attractive option.

McDonald’s counts South Africa as one of its most successful markets in the world, setting a record by opening 30 outlets in 23 months. And Coca-Cola can also boast that South Africans consume three times the world average of their products. Little wonder then that we’ve been identified as a significant growth market for “popularly positioned” products.

A recent study found that low income households spend almost two thirds of their income on food and are unable to afford the rising cost of healthy choices like fish, lean meat, fruits and vegetables. When food is consuming so much of your meagre income you will opt for the most energy for the least price. While pricing on fruits and vegetables has risen steeply over the past few years, the cost of energy dense processed foods has remained almost flat in inflationary terms.

This trend towards cheaper, higher calorie convenience foods has numerous knock-on effects, both in terms of malnutrition and over-nutrition.

Almost one child in five in South Africa has some form of nutritional deficiency putting us on course to raise a stunted generation. In the adult population, life-style diseases like heart disease and diabetes are on the rise, increasing the burden on an already maxed-out health system.

The typical human diet has changed more in the last 50 years than in the previous 10 000 years. This diet has also had more negative impact on the environment than any other human endeavour. All forms of consumption, for food, fuel and fibres, are linked to demands for critical natural resources such as soils, forests, fisheries and fresh water supplies.

Animal protein requires significantly more land and water resources to produce as well as having higher associated greenhouse gas emissions. Processed foods also require more energy and water than whole grains, fruits and vegetables and provide far less calorific value. It is also worth noting that processed foods have the highest freight carbon footprint across road corridors in the country.

South Africa’s food security is by no means certain. For the first time we are net food importers. Agricultural investment is decreasing in part due to uncertainty in land policy, fishery stocks are being steadily depleted, and the increased variability in weather and rainfall creates further uncertainty.

A sustainable food system, which advances livelihoods and ensures that nutritional needs are met and affordable, while simultaneously optimising efficiency in inputs, minimising waste and improving climate resilience, is essential to the wellbeing of our country.

As the business-as-usual development trajectory continues practically unabated, solving the larger food system crisis remains beyond the powers of individuals. This is a system with multiple components and subject to complex challenges meaning that the only viable solution to our growing food problem is an integrated approach across the value chain and all sectors of society.

To this end, the Southern African Food Lab, based at the University of Stellenbosch has partnered with WWF South Africa to support the implementation of a sustainable food system in the nation. The aim is to diagnose the root causes of the food crisis, build consensus around key issues and identify critical policy and sector specific levers for lasting positive change.

Juju’s trim new appearance may be sufficient evidence that change is already afoot. And certainly part of what is required to create the necessary enabling environment is high profile leadership and behaviour worth emulating. What we now need is a groundswell of support around every effort in the right direction.