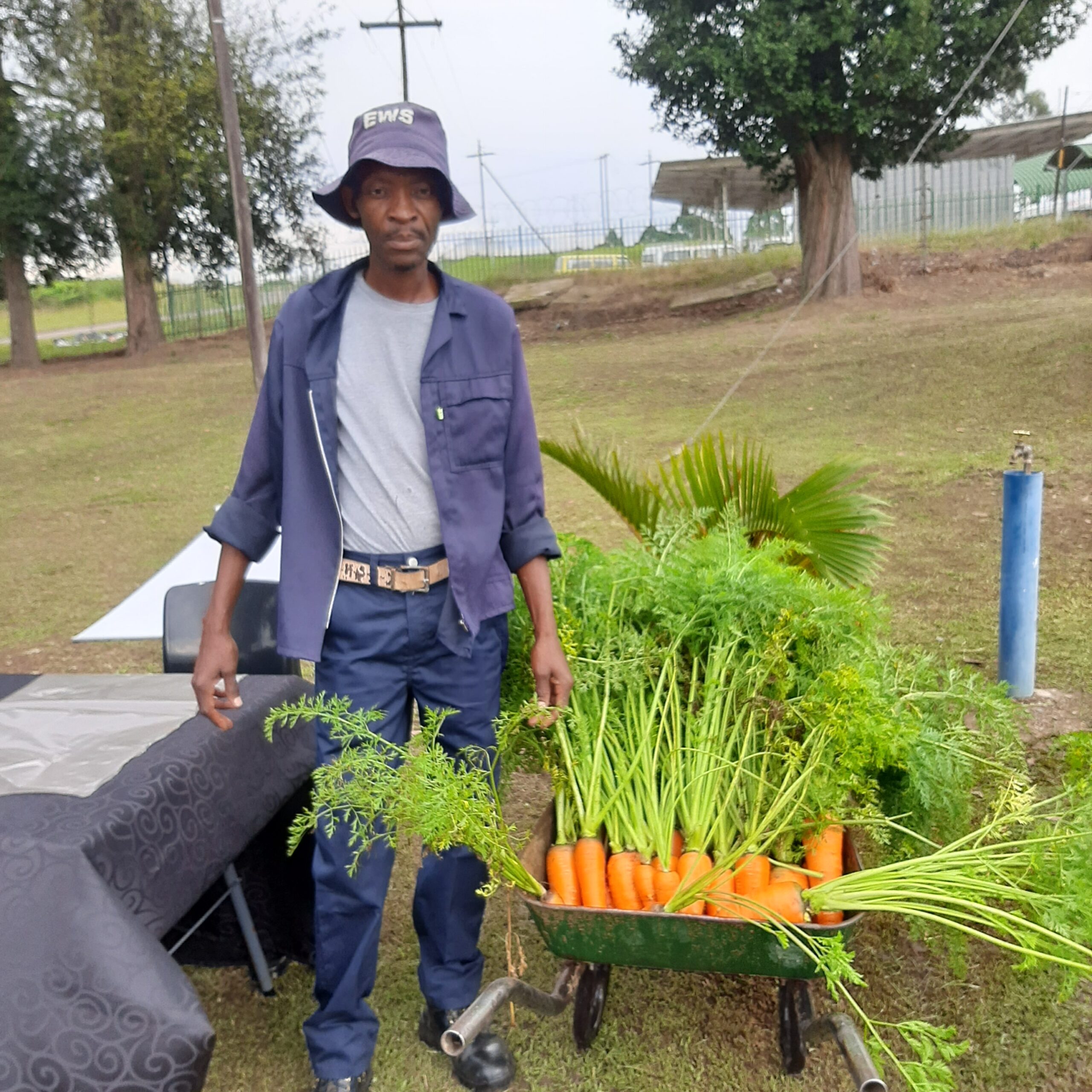 The average household food basket in South Africa increases by R354.22 or 8.9% (February 2022 statistic) and food prices continue to rise. The food poverty line is now R624.00 per month and the child support grant is R460.00 per month. Every year the poverty indices get worse and it is clear how vulnerable food systems are.

These statistics are from the Pietermaritzburg Economic Justice & Dignity Group which proactively works on projects and policies to address poverty. One of these is called Woza Nami (‘come with me’) which focuses on strengthening healthy food production and nutrition awareness through the scaling of vegetable farming in informal settlements based on agroecological practice.

The vegetables are farmed in harmony with the natural environment, including the economic use of water and enrichment of the soil without fertilisers.

Woza Nami is funded by the WWF Nedbank Bank Green Trust and the DG Murray Trust and implemented by the Southern Africa Food Lab in partnership with eThekwini Municipality.

‘Our first farmer support project is in Inchanga, a large peri-urban informal settlement between Durban and Pietermaritzburg,’ says Southern Africa Food Lab member, Mervyn Abrahams. ‘The Inchanga hub is one of seven agroecology hubs initiated by the eThekwini municipality and farmed by local small-holder farmers.’

The agroecology hubs are part of the municipality’s resilience strategy In the greater Durban eThekwini area where approximately 200 000 households in over 300 informal settlements suffer from hunger as there are very high levels of unemployment.

Abrahams says they selected the Inchanga hub ‘because it was functioning fairly well in the sense that it has municipal agricultural extension officers who support the small-holder farmers in the area, it is close to the office of the KwaZulu-Natal Department of Agriculture and close to a clinic, which is important as the project is jointly about healthy food production and nutrition education.’

The diet in most financially stressed households is high in starch, mainly pap, with very little protein and not much fruit and vegetables.

‘We are working with about 30 farmers to elevate their vegetable production in order to be able to sell their produce directly to residents in their community; currently the farmers are mainly producing for their own consumption and we want to upscale this,’ says the director of the Southern Africa Food Lab, Dr Scott Drimie who specialises in human nutrition and is a partner in the project.

Fifteen are part of collectives or cooperatives, with between five and ten farmers doing intensive vegetable farming on half to one hectare. They grow all types of vegetables, including wild crops like amadumbe (similar to a potato) and bambara groundnuts, which are part of traditional diets in KwaZulu-Natal, as well as maize, carrots, spinach, onions, pumpkins, green peppers and lettuce.

Fifteen are “one home one garden” farmers – these are backyard vegetable gardens that supplement the household diet with vegetables.

Agroecology expert Mthetho Mkhungo is working with the farmers on the ground, as are Noma Nene and Londiwe Mhlongo – hands-on officials from the eThekwini municipality. Nene coordinates the Inchanga agroecological hub and Mhlongo runs the food security and health work in the municipality. Also on the ground is Carol Browne, a nutritionist who lives near Inchanga and who is focusing on the nutrition research and education aspect of the project.

‘For these projects to be successful and sustainable, it’s essential that they are an alliance between local government, local farmers, local consumers and local non-government organisations,’ says Drimie.

‘Our goal with the Inchanga hub is to grow the farmers’ markets so that they can start supplying the community, including early childhood development centres, schools and residents,’ says Abrahams. ‘Currently, Inchanga residents buy vegetables from traders coming from the Durban area who source their vegetables from the Clairwood market and retail stores in adjoining areas such as Camperdown or Hillcrest. We’d like to see Inchanga residents increasingly buying vegetables locally which will also boost the local economy.’

In parallel, the nutrition team is working with the community as the demand for refined grain staples and unhealthy packaged ready-made food is huge. The challenge is to increase the local demand for healthy, super-fresh vegetables by advancing nutrition awareness about healthy, affordable diets.

Part of the process is to encourage people to increase their consumption of highly nutritious wild crops and vegetables such as the green leafy amaranth, root vegetables like amadumbe (similar to a potato) and bambara groundnuts. They need less water, cope with extreme heat, do not require fertiliser and have a low carbon footprint.

Part of the Woza Nami project is to investigate the potential to cultivate and popularise indigenous wild crops and vegetables in the informal-settlement farms.

‘Another part of the project is to connecting the farmers with seedling nurseries that practise agroecology, offer training in the principles of agroecology and seed-saving and connect them to other seed-saving farming networks. It can be as simple as holding back one pumpkin, for example, to save the seeds for the next crop,’ says Abrahams.

‘Participatory methods of dialogue, research, experimentation and learning are defining features of agroecological practice – and we have introduced the Participatory Guarantee System (PGS) to the farmers,’ adds Drimie. This is a low-cost, locally-based system of quality assurance within the organic movement, specially designed to include smallholder farmers.

Drimie says the longer-term goal of this project ‘is that it becomes an opportunity for other urban centres to follow something similar, and this way to grow local and national food security step by step’.

This article first appeared in Business Report on 5 April 2022.