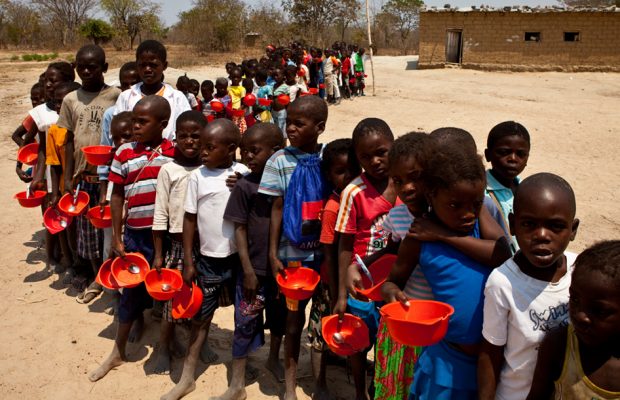 In a Jacana ‘Don’t Shut Up’ conversation with Maverick Citizen editor Mark Heywood, author Tracy Ledger explains the direct link between malnutrition and a propensity for violence. From abused farmworkers to a lack of coordination at all levels of government, the food system not only perpetuates the hunger crisis, it is probably the single biggest factor that explains the gender-based violence epidemic.

In her book, An Empty Plate: Why we are losing the battle for our food system, why it matters and how we can win it back, Tracy Ledger discusses the lack of coordination between national, provincial, and local government, and the fact that nobody is taking responsibility for the hunger crisis. She forensically examined food retailers, from how they profit and set prices, to the supply chain processes.

Ledger explains that one of the reasons she authored her book is because she realised how little the average South African understood about the food system in which we exist:ADVERTISING

Nearly 7,500 children under the age of five die annually in South Africa as a direct result of hunger. “This is not because of the long-term effects of malnutrition on the immune system, [these children] literally starve to death,” says Ledger.

Moreover, Ledger states that one in four South African children are “so chronically malnourished” that they are classified as stunted. This means those children are prone to suffer ill health, hypertension, diabetes and likely to be obese later in life due to the permanent damage of their metabolic system.

“Those children are also much less likely to do well in school, because their cognitive development standards, even if we had a fantastically functioning education system, would be disadvantaged,” says Ledger.

Malnutrition not only affects a child’s health, but it permanently damages the brain’s impulse control, which in turn creates an increased propensity for violence in adults.

Ledger explains that, “It is highly likely that the single biggest factor that explains our extraordinarily high levels of violence and domestic violence is, in fact, directly related to childhood malnutrition.”

Why we have a malnutrition and hunger crisis

Nearly 80% of South African households do not spend enough money every month for basic nutritious food items. Ledger says this is because there is simply not enough money in these households to buy food:

“People cut down on the most expensive items: the quality protein, which is exactly what children need to develop cognitively and physically.”

She says we should be asking why food is so expensive?

“The gap between retail processed food and farm gate processed food has widened considerably over the last 20 years. Farmers are getting a smaller and smaller share of the result of food [production], and as food prices go up, households can afford to eat less and less food.”

Ledger adds that while social grants and child care grants are “better than nothing”, none of the expenditure is going directly to support hungry households in rural areas that could earn a livelihood from farming.

In her book, Ledger points out that although there is a constitutional right to food, there is not a definition for hunger or for sufficient food and there is not accurate monitoring of levels of malnutrition.

South Africa is not a poor country, we have a lot of agricultural production, but Ledger says that we must want to change the system.

“This is nothing new. For hundreds of years, poor, hungry black people have essentially been invisible in this country.”

In her book, Ledger states that this is a question of power and that choices were made in the early 1990s to liberalise the food market because there was the belief that the market would be efficient and regulate itself. This, in fact, turned out to be the exact opposite.

“What puzzles me is that in this country there are a bunch of big food processors. There is a Constitution that says everyone has a right to sufficient food. Yet, there are 14 million hungry people, or frequently hungry people,” says Heywood.

So, what is going wrong?

Ledger explains that it is extremely difficult to talk to policymakers about this problem because the government is divided, and no specific department really has oversight for the retail food sector.

While the Department of Trade and Industry is responsible for supermarkets that sell food, the production system itself (from farm to shelf) is essentially unregulated.

Nearly a quarter of South Africans go to bed hungry each night, according to a South African National Health and Nutrition Examination Survey. Covid-19 may have perpetuated the hunger crisis, but it did not cause it.

Ledgers says that what shocked her most during the lockdown was how many senior government officials who are responsible for this situation did not realise how bad it had become.

“How can you be so uninformed? This is not just a couple of thousand people. I mean, this is literally a quarter of the population that we are talking about.[How can you] not be aware that millions of South Africans go to bed hungry every night?

“How do we think we think we can build a genuinely democratic and equitable state when… millions of South Africans…[face] the daily strife of hunger?”

Basic income grants and social grants are not the only issue. Ledger reminds us that this is “essentially a transfer from taxpayers, to the people who are perpetuating the current food system”.

While it is better than nothing, Ledger says that social grants create the “illusion” of giving benefits to hungry households.

“The net money immediately goes into the sector that is perpetuating the system. That is the reason people can’t afford to eat in the first place.”

This became clear during lockdown. A research report by the Pietermaritzburg Economic Justice and Dignity group, found that in the first six weeks of lockdown, retail food prices had rocketed. But at the same time, farmers were getting paid less for their food.

“I also find it completely iniquitous that there is no corporate movement or retail food sector movement to protect the interests of farmworkers.”

Ledger says farmworkers are probably the most abused category. One of the reasons why farmers often cannot afford to pay more is because they are not getting paid more by the people who are buying food from them.

Ledger asks why we are not putting pressure on retailers to pass back a percentage of the retail price that is specifically for the benefit of farmworkers and why retailers are buying from farmers who engage in violating the human rights of the people who work for them.

“[Retailers] will brag about the supply chains; they won’t sell you a tub of jam that’s been in contact with a peanut in case they kill you. But they supposedly don’t know anything at all about what goes on in the farms of the people who supply them.”

Since her book was first published in 2016, Ledger says that things have not changed for the better, with the fiscal situation of local government deteriorating tremendously:

“A lot of the money that should go to subsidise free basic electricity and free basic services, which then makes more money available in households to spend on food… only about 7% of households are actually receiving that equitable share allocation because the rest is going to prop up and increasing the bankrupt local government.”

What we can do to change the system

There is a key role for cities to play in embarking on food planning.

“Local municipalities are critical partners in this, because they are the people who have control over the resources, and they’re also the people who should know what is going on in their communities.”

However, there is no food planning or integrated development planning in local government.

“Toronto, India, Australia, Europe, and South America all do food planning because they understand that it’s an extremely critical part of local development.”

Ledger says we are all equally responsible for changing the system and fixing the problem.

Both Heywood and Ledger point out that there are no protests about hunger. No marches, no nationwide uproar.

“We need some social solidarity around this. Even if you’re a person who is not 100% worried about putting food on the table, you need to understand that this is also your problem and that you have a strong vested interest in a sustainable solution. Whether it’s the public healthcare burden, whether it’s levels of violence, whether it’s the simple immorality of it, whether it’s the fact that the social fabric will finally tear apart, this is your problem.”

“I don’t know how we ended up in the situation where you kind of have to ask someone nicely to deliver your constitutional rights to you. It is yours and you get to claim it.”

The discussion can be accessed here.

This article first appeared on the Daily Maverick website on 18 September 2020.